What Growers Can Do to Transform Rural America 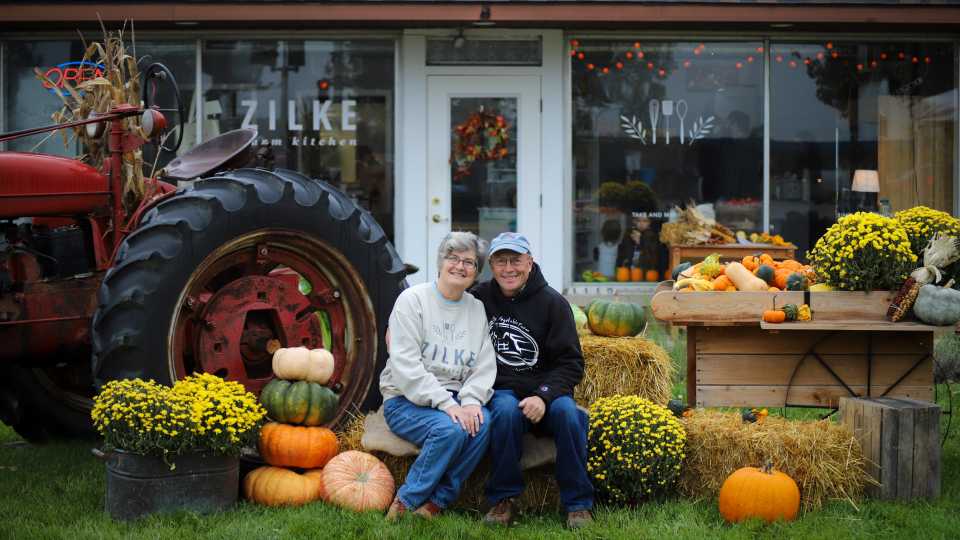 Farms have an outsized impact on rural economies. They are often the predominant employers, and small-town fortunes can rise and fall with their local growers. USDA’s Economic Research Service says that while agriculture, forestry, and mining remain the main drivers of the rural economy, another sector has the most job growth: service and retail. One Michigan vegetable operation is taking a step outside of production to strengthen its financial future. A nice benefit is its hometown’s economy is getting a boost, too. And it combines both agriculture and retail.

Vicki and Tom Zilke own Zilke Vegetable Farm, located in Milan, MI. Milan’s population was just shy of 6,000 in the last U.S. Census. A year ago, Vicki Zilke opened Zilke Farm Kitchen, a shop and subscription business that takes the Blue Apron and Hello Fresh model and makes it local.

Why Open Zilke Farm Kitchen?
Zilke Vegetable Farm already has a farm stand that is popular with its community. Why open another retail outlet?

“It was kind of a two-pronged thing,” Vicki Zilke says. “Number one, the farm stand is a short, seasonal business. And as farmers, we need to just be savvy about the fact that there are slim margins. We are doing important work, and we have to not go out of business.”

She says as popular as their farm stand is, once school started, customers dried up. Even if she and Tom still had plenty of produce to offer.

“We needed to look for ways to stretch that growing season and just stretch that contact with our customers,” she says.

There was another factor involved in Zilke choosing the type of business she did: a passion for health.
Agriculture is a second career for both Vicki and Tom. Tom owned a landscape company before the 2008 recession. Vicki was a nurse practitioner who focused on childhood nutrition.

Her previous career steered her to her current business.

“It’s the nurse in me. I had to reduce some of those barriers to people having good quality food on their tables,” she says.

What It Takes to Open a New Business
Zilke Farm Kitchen involves a great deal more expense and, therefore, risk than a traditional farm stand. Afterall, it must make enough money to cover expenses related to operating out of a year-round building. Then there are the legal hoops related to having a kitchen serving the public. Zilke had a vision of what she wanted to do, and worked hard to create a realistic business plan. She also got a lucky break.

Crain’s Food Summit held a pitch contest in 2016, and Zilke submitted an application. The contest filters participants through several levels, from getting the green light to pitch in the first place to a few rounds of review before finalists and winners are announced. Zilke made it to the finals.

The contest helped her hone her business plan. And it attracted attention.

“There were partners who said, ‘What is it that you need? Can I be helpful to you? Do you need financing? Do you need coaching?’ You know, I discovered there are enormous resources, especially in the state of Michigan.”

MGFF’s core funding is only $30 million, which is pretty small in the investment world. But it’s having a big impact.

Not only is it offering Michigan food businesses loans (ranging from $2,500 to $6 million), it also offers extensive pre- and post-loan technical assistance.

The fund reviews which businesses they support on four criteria:

Other states have their own versions of healthy food financing programs, Donnell says. Seven already have these types of investors, while others are actively creating them. The seven states with active programs are Pennsylvania, California, Ohio, Illinois, Kansas, New Jersey, and Colorado.

Across the country, you’ll find variations in investors’ goals. Some finance only grocers, while others support producers, cooperatives, distributors, and others throughout the supply chain. 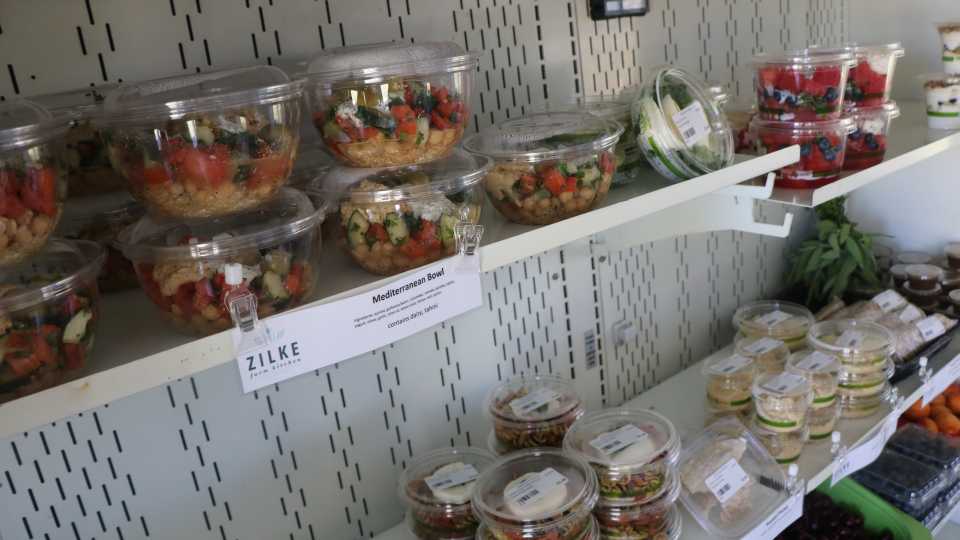 Vicki Zilke thought her main customers would be young families. But ready-to-eat dishes like these also attract busy professions and seniors, too.
Photo by Sharae Richmond

How Can Zilke Impact an Entire Economy?
To better understand how Zilke Farm Kitchen helps boost its local economy, let’s step back and look at how she structured the business.

The Blue Apron/Hello Fresh meal kit concept is at the heart of Zilke Farm Kitchen’s business model. When it opened, the kits generated 40% of the business. But just one year later, other farm-based products have grown significantly.

One is what Zilke calls “ready-to-heat,” which doesn’t need any prep work. The other, ready-to-eat, doesn’t even need to be heated. Shoppers can consume it while driving away from the store.

All of these require a steady, year-round source of ingredients. There are several categories beyond vegetables needed, including meat, dairy, fruit, spices, honey, and so on. Zilke buys from local suppliers as much as possible for those.

She even purchases vegetables from others. Zilke’s production operation doesn’t grow everything she needs.

And not everything can be locally sourced. Michigan isn’t exactly known for its lemon industry, after all. And vegetable fields lie dormant in winter.

So she uses a distributor based less than 30 miles away in Ann Arbor, MI.

The result? She’s pumping money into her community through not only her own employees, but also those working for all her suppliers.

How Zilke Will Grow
Zilke Farm Kitchen does not rely on sales from its store front alone. Its CSA-like subscription model allows it to expand beyond its physical boundaries. Customers buy a minimum of two meal kits a week, which they can pick up at either the store or at two other locations. Both locations are outside of Milan, expanding her reach.

One pick up location is a popular farm-market-meets-grocery-store business in Ann Arbor called Argus Farm Stop.

Argus Farm Stop is like a farm stand in that farmers get the bigger cut of their produce sales — 75%. But there’s a single check out, reducing the need for growers to man a booth.

“The farms and producers selling through Argus drop off their products, and we sell on their behalf,” says Bill Brinkerhoff, a co-founder of Argus Farm Stop.

“Our articles of organization put the mission first to grow the local food economy,” Brinkerhoff says. “We are allowed to hire staff and have high quality refrigeration, which is crucial to offering local food on the same convenient, high-quality setting as traditional retail stores.” 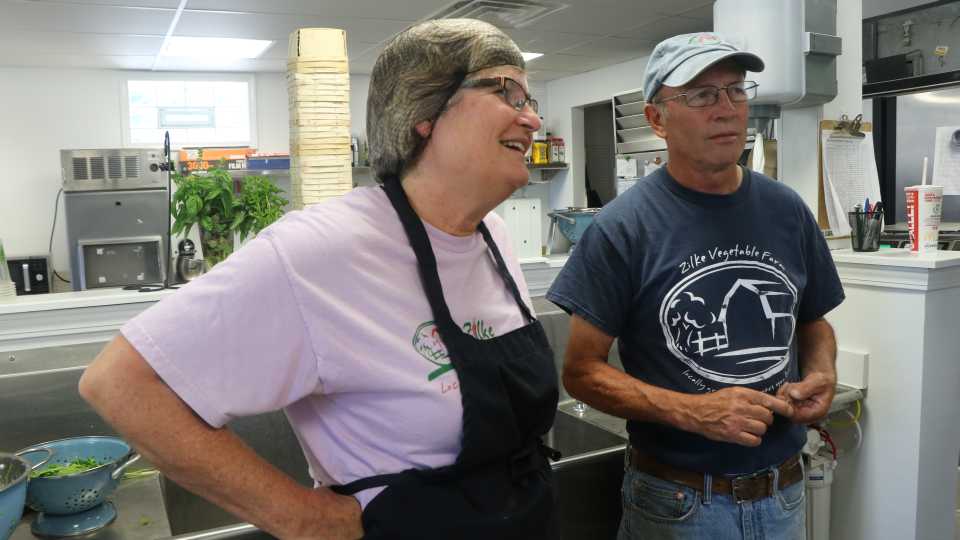 Getting a commercial kitchen up and running takes planning. Vicki and Tom Zilke worked closely with local contractors and zoning officials to create a kitchen that functions as needed and keeps food safe.
Photo by Sharae Richmond

Zilke Farm Kitchen and its fellow businesses offer a model that can be replicated across the country. If enough communities copy the pattern, it can build a rural economy that contributes to growers’ financial health. It can also offer locals more reasons to remain in their community.

“We have lost over 90% of local farms that produce food in our area since 1950,” Brinkerhoff says.

“The failure rate among young farmers is 50% within five years. Something needs to change. Once the ability to produce food locally is lost, it is very difficult to rebuild. We built Argus as an experiment to see if it could work to reverse this trend. We are pleased to see the impact — over $9 million in sales, with over $6 million paid out to local farms/producers.”